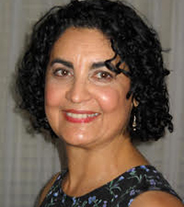 Since 2006, Maria Cornelio has been Coordinator of the Bachelor’s Degree Spanish Major Concentration in Translation and Interpretation at Hunter College, City University of New York, where she teaches introductory and advanced general translation courses as well as medical translation.
Previously, for ten years she directed the Hispanic Resource Center of the Columbia University Medical Center, where she directed language-support programs for Spanish-speaking patients in clinical trials and carried out language-competency assessments of bilingual healthcare professionals. In addition, she trained clinical investigators in issues related to culturally-appropriate research. During this period she also served as Spanish-language consultant for the Institutional Review Board of the New York State Psychiatric Institute. She has designed and taught translation courses for the University of Chicago and New York University. As a member of the N.Y.C. Health and Hospitals Corporation CLAS Office Working Group, she helped to develop the linguistic competency assessment for the CUNY Healthcare Interpreter Certificate Program. As a member of the North American Academy of the Spanish Language, she collaborated in the development and review of the Spanish Language Style Guide and several Glossaries available on the multilingual section of DigitalGov.gov. These glossaries are used by Spanish language U.S. government website writers and editors and well as translators. DigitalGov.gov is run by the U.S. General Services Administration.
She has a Certificate in Training of Trainers in Interpretation from the Monterey School of International Studies & University of Maryland, and a Master’s Degree from the Graduate School of International Studies at the University of Denver.