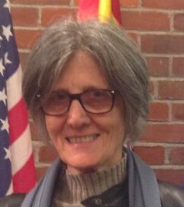 Leticia Molinero has been a professional translator for over three decades. Born in Argentina, she earned an M.A. in Philosophy at the University of Buenos Aires. After moving to the United States she studied communications and financial analysis at NYU.  As a translator she became interested in the challenges posed by communicating in Spanish to widely heterogeneous U.S. Hispanic audiences. She edited a bilingual translation journal, Apuntes, for 11 years and collaborated with Glosas, the Translation Committee Journal of the North American Academy of the Spanish Language (ANLE by its Spanish acronym) for 20 years.  Ms. Molinero has lectured on translation issues in the United States and abroad and has promoted the need to standardize the formal use of the Spanish language in the USA in the areas of communication and information. As a correspondent member of the North American Academy of the Spanish Language (ANLE), she collaborated in the development and review of the Spanish language Style Guide and several Glossaries available on the multilingual section of DigitalGov.gov.  These glossaries are used by Spanish language U.S. government website writers and editors and well as translators. DigitalGov.gov is run by the U.S. General Services Administration.

As a Full Member of ANLE she spearheaded the notion that formal U.S. Spanish is mainly a product of translation. Ms. Molinero also promoted the creation of a collaborative agreement between the Federal Government and ANLE in which she is named as the working liaison between the two organizations. Subsequently she became co-chair of the GSA-ANLE Committee. This committee was responsible for standardizing the translations into Spanish of the A-Z Index of U.S. Government Departments and Agencies, as well as providing answers to language-related queries from several agencies. As chair of the Committee for the Standardization of United States Spanish, Ms. Molinero set up a task force to retrieve words that, in the formal use of Spanish in the USA, acquire meanings that are different from their traditional Spanish meanings, as well as commonly-accepted Anglicisms.  The Committee agreed to identify these words as estadounidismos.

Aware of the need to do evidence-based research that may lead to determining the equivalent of plain language for U.S. Hispanics, Ms. Molinero proposed to a select group of language professionals the founding of the Research Institute of United States Spanish (RIUSS), which was incorporated in the State of New York in April 2015.