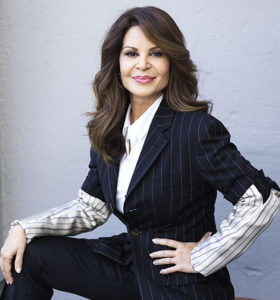 Latina media dynamo and women’s empowerment advocate Nely Galán, dubbed the “Tropical Tycoon” by The New York Times Magazine, is one of the entertainment industry’s savviest firebrand talents. An immigrant and self-made media mogul, Galán was the first Latina President of Entertainment for a U.S. television network, Telemundo. She is an Emmy Award-winning producer of over 700 episodes of television in Spanish and English including the FOX hit reality series, The Swan.

After becoming self-made on her own terms, Galán has made it her mission to teach women—regardless of age or background—how they too can become entrepreneurs. Her New York Times bestselling book, SELF MADE: Becoming Empowered, Self-Reliant, and Rich in Every Way, Random House (2016) was inspired by the new revolution in women’s entrepreneurship led by multicultural women in the U.S. and emerging women around the world.  Galán wrote the book as a manifesto to ignite the SELF MADE movement, uniting all women on a quest for an economic future they control.

SELF MADE is a blueprint, a mindset and a movement, but most of all, it is a call to rise up and take ownership in ways big and small. You do not have to look up the ladder to find the self-made woman—you simply have to look around. She is everywhere. From the part-time Lyft driver, to the Etsy store owner, to the unrelenting startup CEO. The one thing all of these women have in common is that they are becoming self-made. SELF MADE is for every woman with untapped greatness in her who just needs the tools to get started.

Galán is also the founder of the nonprofit The Adelante Movement (“Let’s get going!” in Spanish), which seeks to train and empower Latina women to become entrepreneurs. Soon, not just Latinas, but women of all backgrounds began showing up to her events which was a clear signal to Galán that all women, in particular multi-cultural women, were leading a new economic women’s movement. The revolution around financial self-reliance had already begun. The book Self Made is the culmination of nearly four years on the road meeting and training women who have collectively become the largest growth engine in the country.

Galán is the former President of Entertainment of the powerhouse television network, Telemundo, making her the first Latina president at a major network. She has owned and operated her own media company since 1994 and continues to be a serial entrepreneur and real estate investor. Her company, Galán Entertainment has helped launch 10 groundbreaking television channels in Latin America and has also produced over 700 episodes of programming that crosses all genres such as reality series, sitcoms, telenovelas and talk shows in both English and in Spanish.

She is the creator of the Fox hit reality series The Swan, which has aired all over the world.

In 2008, Galán appeared on the first season of the NBC hit, The Celebrity Apprentice with Donald Trump, joining an all-star cast including Gene Simmons, Nadia Comaneci, Marilu Henner, and the infamous Omarosa. Galán’s appearance on the show, where she raised $250,000 for her charity Count Me In for women entrepreneurship, cemented her reputation as one of the nation’s top female thought leaders.

Galán went back to school in 2008 for a Masters and Doctorate in Clinical Psychology. She believes it’s never too late to go back to school.

Galán is a sought-after speaker on the subject of women entrepreneurs, the role of diversity in the US economy and how to become Self Made. She speaks to diverse audiences and has spoken at renown places such as Coca-Cola, American Express, General Electric, the US Chamber of Commerce, the Gates Foundation, the Clinton Foundation and the United Nations.

Galán is also frequently cited for her influential work as a board member for the Hispanic Scholarship Fund, which is the number one resource for Hispanic and Latino scholarship programs. She is also the Coca-Cola Company Advisory Council. She is an Emeritus member of The Smithsonian Board and was featured in HBO’s The Latino List documentary and national museum show as one of the most influential voices in the Latino community.

She is passionate about teaching financial literacy and entrepreneurship to teens and college students. Her 17-year-old son has his own YouTube Channel called HypeBeastU, he has already started his Self Made Journey.

Galán is based in Venice, California, where she lives with her family.