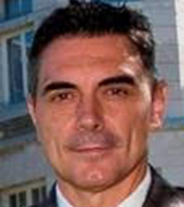 Alberto Acereda, Ph.D. is the Senior Director of Business Development in the Global Education and Workforce Division of Educational Testing Service (ETS) in Princeton, NJ. He formerly served as Senior Strategic Advisor to the Vice President and Chief Operating Officer of Higher Education. After receiving his B.A. in Hispanic Philology (1988) from the University of Barcelona and his Ph.D.  (1994) in Romance Languages and Literatures from the University of Georgia, he worked for almost twenty years in several universities, and more particularly at Arizona State University, where he was Department Chair, and also  Director of Graduate Studies of the School of International Letters and Cultures. At Arizona State University he was also a member of the Provost’s Executive Committee and President of the Academic Senate in the College of Liberal Arts and Sciences where he was also named Dean’s Fellow.

While he continues to be a Research Faculty Affiliate at the Hispanic Research Center at Arizona State University, Dr. Acereda has also been a Visiting Scholar and Professor in the School of Arts and Sciences at the University of Pennsylvania. He is a member of the editorial board of several scholarly journals and is the editor of the Journal of Hispanic Modernism. He is the author of several key scholarly books and studies on Latin American and Spanish poetry and particularly on the fin-de-siécle, modernismo and modernity within Hispanic literary and cultural studies.

Dr. Acereda has also published, lectured, and taught extensively in the area of transatlantic literature, covering several areas and periods of both Spanish and Latin American literatures. He has been recognized as a world-class scholar on the renowned Nicaraguan poet Rubén Darío (1867-1916), whose works Dr. Acereda has translated into English and published at Duke University Press and Bucknell University Press. He is a member of the North American Academy of the Spanish Language and a founding member of RIUSS.