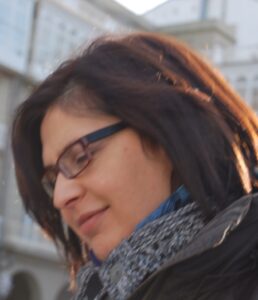 María Araceli Alonso Campo obtained her PhD in Applied Linguistics in 2009 from the Institut Universitari de Lingüística Aplicada (IULA) of the Universitat Pompeu Fabra in Barcelona. Prior to receiving her doctorate, she was a researcher as a member of the IulaTerm and InfoLex groups where she participated in numerous national and international research projects on terminology, lexicography, corpus linguistics and translation. During her doctoral training she was also a member of the teaching staff of the Department of Translation and Language Sciences at the Universitat Pompeu Fabra. Since then, she has participated as a collaborating professor in the Master’s Degree in Dictionary Development and Quality Control of the Spanish Lexicon at the Universitat Autònoma de Barcelona and the Universidad de Educación a Distancia.

Her doctoral thesis, Characteristics of the Spanish lexicon of the environment and patterns of representation in the general dictionary, opened the doors for a postdoctoral stay in France within the framework of the National Program of Mobility of Human Resources for Research of the National Research Plan, Development and Innovation (R+D+i) 2008-2011 of the Spanish Ministry of Education and Science.  She joined the LiCoRN team (Lexicographie, Corpus et Ressources numériques) of the HCTI Laboratory (Heritages, Constructions dans le Texte et l’Image) of the Université de Bretagne-Sud, consolidating her research in corpus linguistics and lexical studies. After completing her postdoctoral stay, she joined the Département d’Études ibériques et ibéro-américaines and, subsequently, the Département de LEA (Langues étrangères appliquées) where she was a professor of Spanish and translation until 2016.

In 2016, she became a contract professor at the European University of the Atlantic in Santander, Spain where she has taught Spanish language, corpus linguistics and terminology in the degrees of Translation and Interpreting, Applied Languages and Primary Education, as well as in the degrees of Journalism, Advertising and Public Relations and Audiovisual Communication. In this institution, she held the position of Academic Director of the Translation and Interpreting Degree and the Applied Languages Degree until 2022. She has also coordinated the Language Area of the university and has promoted several complementary training activities for students such as the University Debate League UNEATLANTICO, as well as the participation of Translation and Interpreting and Applied Languages students within the framework of the RIUSS project. Most recently, she just joined the Department of Language and Literature Didactics at the University of Valladolid (Palencia Campus) as an assistant professor.